So, three times a year we go to Strategicon events in LA. The most recent one at the time of this writing was Gateway 2017. What follows are my thoughts on the games in which I was involved during the weekend. 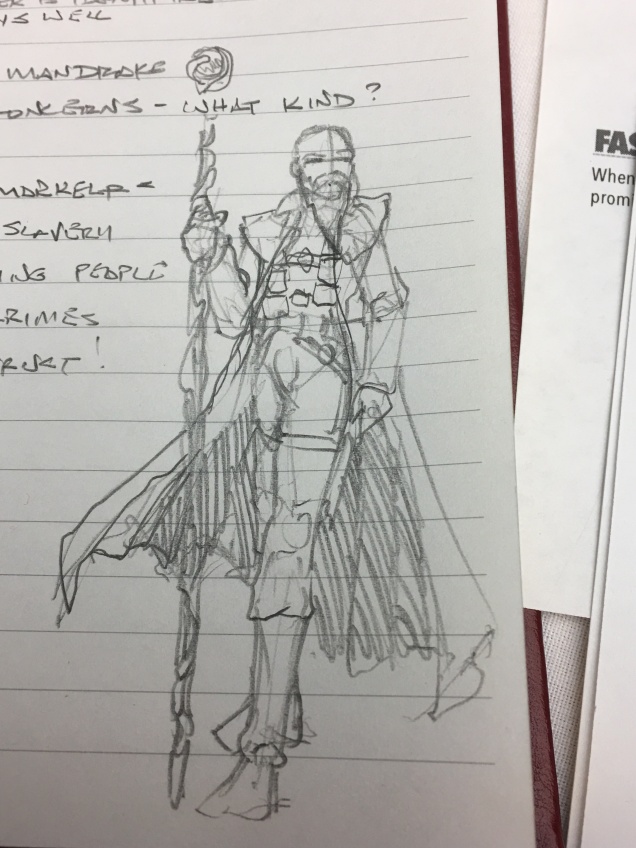 Cybertech and magic, these are the core hallmarks of the Shadowrun concept. In many ways, this is my Reese’s cup of games, the perfect mingling of high technology and high fantasy in an urban metroplex that lights the night with equal parts, neon, gunfire, and magic. Touched is a really good implementation of the Shadowrun idea in the elegant system that is the Sprawl. Then to have the game run by the designer of the Sprawl my good friend Hamish Cameron made this a perfect maelstrom of elegance in a game. Hamish is a spectacular gm who always brings an immeasurable energy to the games he runs. I had the opportunity to be the first person to play the Mage playbook.  What could be better than a norse techno-mage weaving the ancient power of the Norse gods together with high technology to tear apart the fabric of reality and reshape it to his own ends? Add in a great mix of players and we have all the elements for a truly memorable game.

Growing up cannibalistic goblin! Ok, so we’re goblins … and we gain power by eating the viscera of whatever we kill … cool !!! Powered by the Apocalypse, this is a great game under development by the mind that gave us the Sprawl, Hamish Cameron. In an apocalyptic world that’s harsh and dangerous and very interested in killing poor little goblins just trying to eek out some kind of life. We chased, killed and ate giant lizards, we killed and ate one of our village leaders, some of us got killed and eaten by our fellow goblins … How rude. This was a wonderfully fun and dark game with great players and a great gm and who doesn’t want to be a cannibalistic goblin? Oh wait, is that just me?

If the Dresden Files, and the Magicians had an illicit love child, it might very well be this game. Set in modern day NYC a group of mostly college age people who have always thought that there was more to the world than what people could see and learned quite suddenly that, yes, there was in fact real magic in the world. As is so often the case, I was blessed with great players who made my little game a wonderful thing. There was excitement, there was surprise, there was betrayal. All in all a fun game, and I am very gratified by the positive response from the players. 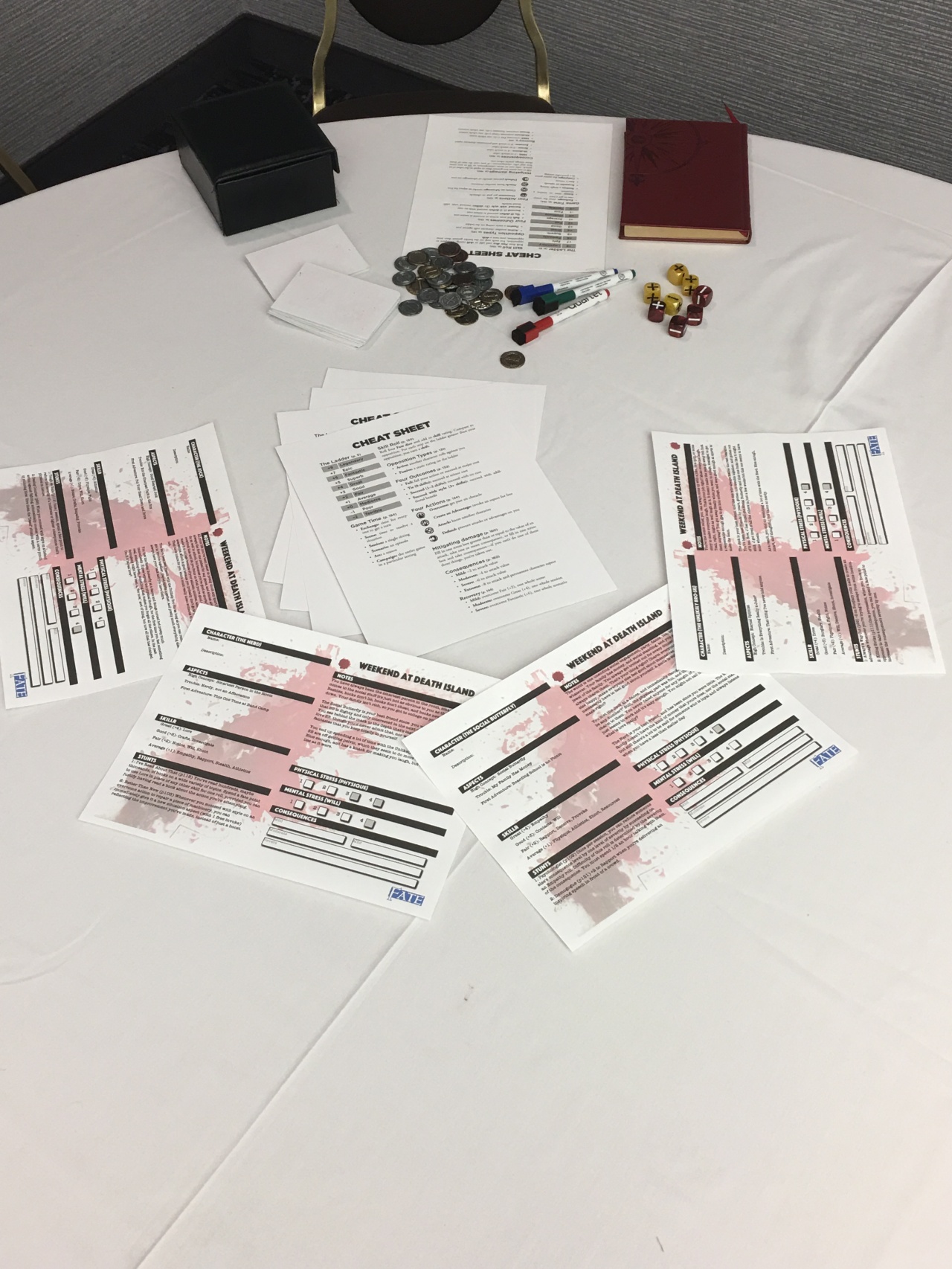 We’ll take a trip for spring break, we’ll go to Daytona, we’ll have some laughs … Then they wake up on the beach of an island they do not recognize. Welcome to Death Island, a lovely tropical island somewhere. Don’t mind the quicksand, or the dangerous animals, or the other campers who might be trying to murder you so they can be the ones to get off the island. Oh, I forgot to mention, there’s a boat that will take two of you off the island. Good luck. Again, I can only commend my players for making my little, inspired by, “the Most Dangerous Game,” romp fun. You guys are awesome.

Masks vs the Doom from the Past

Masks has quickly become one of my very favorite systems. Who doesn’t love the idea of being a teenage super hero? In Masks vs the Doom from the Past, Carl Rigney, who is one of the best gm’s and one of the nicest people I know, put up a wonderful romp against some human supremacist neo-nazi activists who were intent on making Halcyon City great again and, “we don’t need those stinking supers, we can save ourselves.” Oh by the way to prove that point we’re going to set up an attack on our own people so they can save themselves and prove to the world that we don’t need supers to protect us …

I took up the Bull playbook and got to try to fill the shoes of the incomparable Gina Ricker, which I did badly but had a ton of fun trying. You can expect to see a write up of Masks in this space shortly.

The Sunday night slot at a game convention is a great time to play over the top punch-drunk shenanigans, and that is exactly what we did. Fate Core is a great system for rendering Star Wars, and Morgan Ellis is a master Fate gm. There were rebel space pirates preying on innocent Imperial shipping, oh wait, that was us. Little did we know that it was all a TRAP! The empire, dastardly villains that they are, put a tracker and probe droids on the freighter that we, “liberated,” from them. Much fighting and fun ensued, including sneaking onto the Imperial Star Destroyer to disable it because none of our little fighters were having any luck. Nor could my hidden jedi really do anything in a fighter. As always, a great game from Morgan and a ton of fun.

In Defense of House Stark

Mook was, is, and always will be the grand master of all things GURPS, and when I grow up as a gm Mook is what I aspire to. Nobody does prep on the scale and detail of the Mook. Add into that an incomparable ability to conceive and write games that are interesting, evocative, and fun, and an open generous heart and absolute facility with the system and you have a mix that leads to consistently the best games ever. In Defense of House Stark, did not disappoint in any way. Great characters with depth and emotional weight, a story that mattered to all of us in different ways and for different reasons, and a story that represented the IP, brought to life, and made personal all the best things from Game of Thrones, and real drama to wrap the whole thing up.

As guards and soldiers of house Stark, in Winterfell, we were the only ones who could be spared to go rescue poor Sansa and Arya when they were kidnapped by mysterious raiders in the night. We chased them all the way to the Dread Ford only to find out that of course, the Lannisters were behind it all and we were going to have to fight the Mountain to free the girls. As always a spectacular game and a ton of fun.